Evel Knievel was a famous motorcycle daredevil with an
“iconic wardrobe: a white jumpsuit embellished only by star-spangled red,
white, and blue patriotic insignia with a matching white cape and helmet and a
motorcycle adorned by red, white, and blue colors.” “In 1973, Ideal Toys
released the Evel Knievel Stunt Cycle, a toy which features a doll of Evel
Knievel in his signature…jumpsuit and matching helmet.” The toy came with a red
“energizer”, which wound up the toy to be released. K&K claimed rights
relating to Evel Knievel, including trademarks, copyrights for audio/visual
works, right to publicity, existing licenses, contracts, and common law rights.

Toy Story 4 featured a new character, Duke Caboom, who rides a Canadian-flag-colored motorcycle and dresses in a white jumpsuit, helmet, and cape with Canadian insignia. His insecurities are revealed by a flashback to a 70s era scene where a child is playing with his Duke Caboom doll while watching the commercial advertisement for the “Duke Caboom Stunt Cycle.” The toy could not perform as advertised in the commercial. In his final stunt, Duke Caboom tries to jump 40 feet across an amusement park and through lights fabricated to look like a ring of fire. He fails. Disney promoted Toy Story 4 with materials featuring Duke Caboom and also sold Duke Caboom Merchandise, including a Duke Caboom doll in a white jumpsuit with a cape and belt buckle adorned by a red Canadian insignia, a matching helmet and motorcycle, and a red “launcher.” 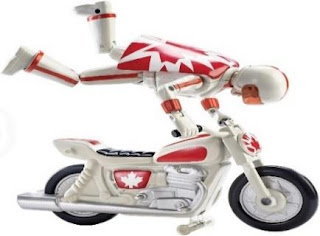 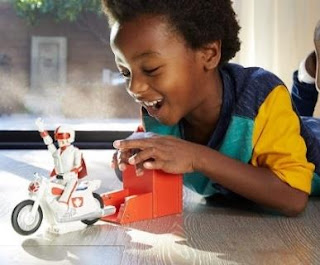 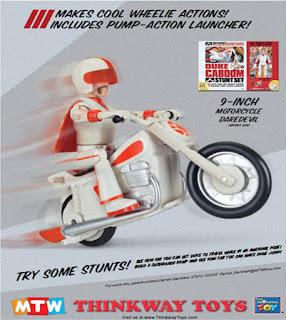 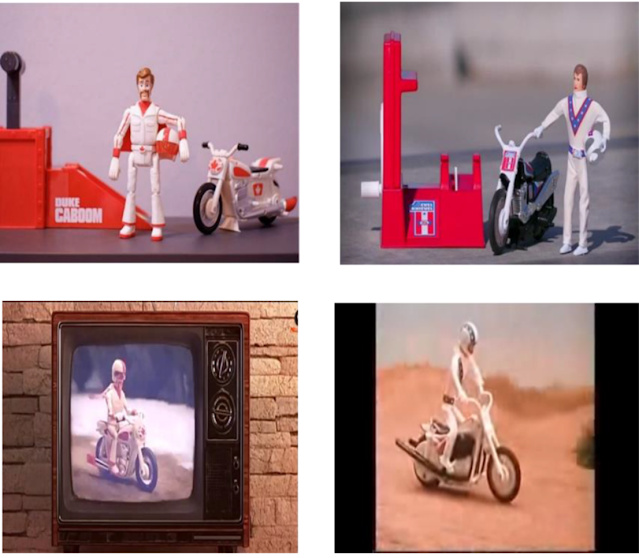 K&K’s false endorsement/false description, trade dress infringement, trademark dilution, and state law claims including right of publicity claims all failed on a motion to dismiss. Rogers applies to the Lanham Act and coordinate state law claims, and this isn’t a difficult Rogers case. K&K simply failed to plead facts indicating that Toy Story 4 wasn’t an expressive work, or that associated merchandise wasn’t sufficiently attached to the “host” expressive work. “It is … well-established that advertising and the sale or licensing of consumer goods related to an expressive work like a film are incorporated into the same Rogers test analysis.”

Obviously, “the alleged allusion to Mr. Knievel bears substantial artistic relevance to the creative work.”  K&K argued that Duke Caboom wasn’t artistically relevant to the film because it does not add “any original material element” to Toy Story 4 and is used “solely to import Evel Knievel…into the film.” That’s not a way around Rogers. “The court is not willing to make the unreasonable inference on the facts that the Duke Caboom’s appearance is simply a gratuitous showing of an Evel Knievel-esque motorcycle stuntman.”

Nor was there any explicit falsity that would confuse consumers into thinking that the “celebrity is somehow behind the [the film] or that [he] sponsors the product.” The “nature of [Disney’s] behavior” and not “the impact of the use” on consumers was the key, even if there had been consumer confusion evidence. The court unnecessarily points out that the toy has “a different name, appearance, and backstory from Evel Knievel.” More to the point, the use of a mark alone is not enough to satisfy this prong of the Rogers test, otherwise “it would render Rogers a nullity.” Even if Disney’s use of Evel Knievel was “blithe,” it was nonactionable without explicit misleadingness.

ROP: The Nevada ROP statute specifically exempts uses that are an “attempt to portray, imitate, simulate, or impersonate a person in a… film” and uses “in connection with an advertisement or commercial announcement for a use permitted by this subsection.” As for the toys, the court predicted that Nevada would imitate California, as it has done in similar situations before, and adopt a transformative use defense. This could be resolved on a motion to dismiss, especially since ROP laws implicate broad free speech interests and “a speedy resolution is desirable because protracted litigation may chill the exercise of First Amendment rights.” Here, Evel Knievel was one of the raw materials for the work, not the “sum and substance” of the work; the work was primarily Disney’s own expression; Disney provided the marketability and economic value of the work because it’s Disney and people already like Disney; and Toy Story 4 wasn’t just a mere exploitation of the fame of through a conventional portrait, superseding the artist’s skill and talent. In California terms, this was more Kirby (video game with a reporter from outer space character who looked like a real singer) than Comedy III (conventional charcoal portrait).

As in Kirby, Duke Caboom was “reminiscent” of Evel Knievel, but not a literal depiction. Unlike the sports videogame cases “where the video game avatars looked the exact same outside of their name and hometown, Duke Caboom is not a carbon copy of Evel Knievel minus a few details.”

Distortions of a celebrity figure “are not, from the celebrity fan’s viewpoint, good substitutes for conventional depictions of the celebrity and therefore do not generally threaten markets for celebrity memorabilia that the right of publicity is designed to protect.”