I had a stroke | Domain Incite

Of the four men in the room, Tony has it worst. A very elderly gent, he spends six hours a day catatonic, and the rest of his time sleeping, stirring every few minutes to wail loudly as if in horrific pain or equally horrific sexual ecstasy.

When the nurses come to wash him and clean up his shitted bed, which is every three or four hours, he hurls barely comprehensible insults and threats and tries to strike them with flailing palms he cannot form into fists.

They work away uncomplainingly, soothingly, like he’s their favorite granddad. Observing them work at 4am on my second unsleeping night makes me cry for the first of two times during my hospital stay. These guys are the closest thing reality has to angels, and I hope Boris chokes to death on his 3% while waiting for an ambulance.

There’s an octogenarian in the next bed, Trevor.

He’s white, but the full top half of his face is shining ebony from where a piece of furniture intercepted it when he briefly blacked out and fell during some kind of cardiac event. He looks demonic, but he’s the sweetest guy you could ever hope to meet.

They’ve put him in an elaborate medical collar and told him he can’t take it off for the next two months, not even to shower. One wrong move and his spine might snap like a twig and he’ll spend the rest of his life worse off than Tony.

At least he won’t have to dress up for Halloween, he grimly muses.

Then there’s the youngster, Tim, who reels off a laundry list of his ailments, many of which he thinks will soon kill him, not least of which is the fact the he just accidentally proposed to his short-term girlfriend, who said yes.

He has an upcoming try-out for a local sports team, but his deepest wish is to have both his legs amputated.

In this room of four, I feel like the lucky one.

It happened at some point during the evening of the 13th into the following morning.

There was no pain — no physical sensation at all, not even a headache — I simply woke up disabled and oblivious to that fact.

My first inkling that something was amiss came when I found I couldn’t double-click my mouse with my right index finger. I had a general weakness in my right arm, but I chalked this down to having slept on it funny.

I felt a bit off for most of the day, but it wasn’t until the evening, when I tried to insult my cat, that I realized something was terribly wrong. Even after three attempts, the words got garbled on the way out of my brain and slipped and slurred out of my mouth. I could see the cat didn’t look offended in the least.

I knew that I’d had or was having a stroke, and I was in a taxi to the hospital 20 minutes later.

All the NHS TV spots about strokes focus on teaching the viewer how to spot the symptoms of stroke in others, presumably because the victims themselves are usually too addled and confused to recognize them in themselves.

This gave me comfort. I was totally lucid, in thought if not in speech.

Three doctors, one consultant and a CT scan subsequently — after many terrifying hours of uncertainty — confirmed I’d had a “mild” or “small” stroke, buggering up my dominant right arm and leg as well as my speaking voice.

My face was mercifully spared. Still a straight-up 10, ladies.

This all happened due to a combination of recent stresses and two prior decades of hedonistic, borderline arrogant devil-may-care intemperance. Too much booze, too many fags, not enough self-control.

I’ve known I have hypertension for the best part of a decade, and done precisely fuck-all about it. Getting stroked was not so much predictable as inevitable. I have nobody to blame but myself, and this list of people (pdf).

My right leg is probably the injured member I’m least concerned about.

I can walk in a straight line easily enough, albeit with a noticeable limp, but my brain currently finds some usually straightforward perambulatory maneuvers surprisingly tricky.

I haven’t fallen over or tripped, not once, since the stroke. But, like Zoolander, I can’t turn left.

My hand is altogether more worrying. My stroke was on the left side of my brain, meaning the right side of my body was affected. I’m right-handed.

I can use the hand to open a door, pick things up, flush a toilet — I even assembled a piece of flat-pack furniture yesterday — but anything requiring more than basic coordination is challenging.

I can’t write using a pen without significant effort. I tried writing out my first name in caps on Thursday morning. The four attempts in this image took about five minutes to produce. And it was painful. 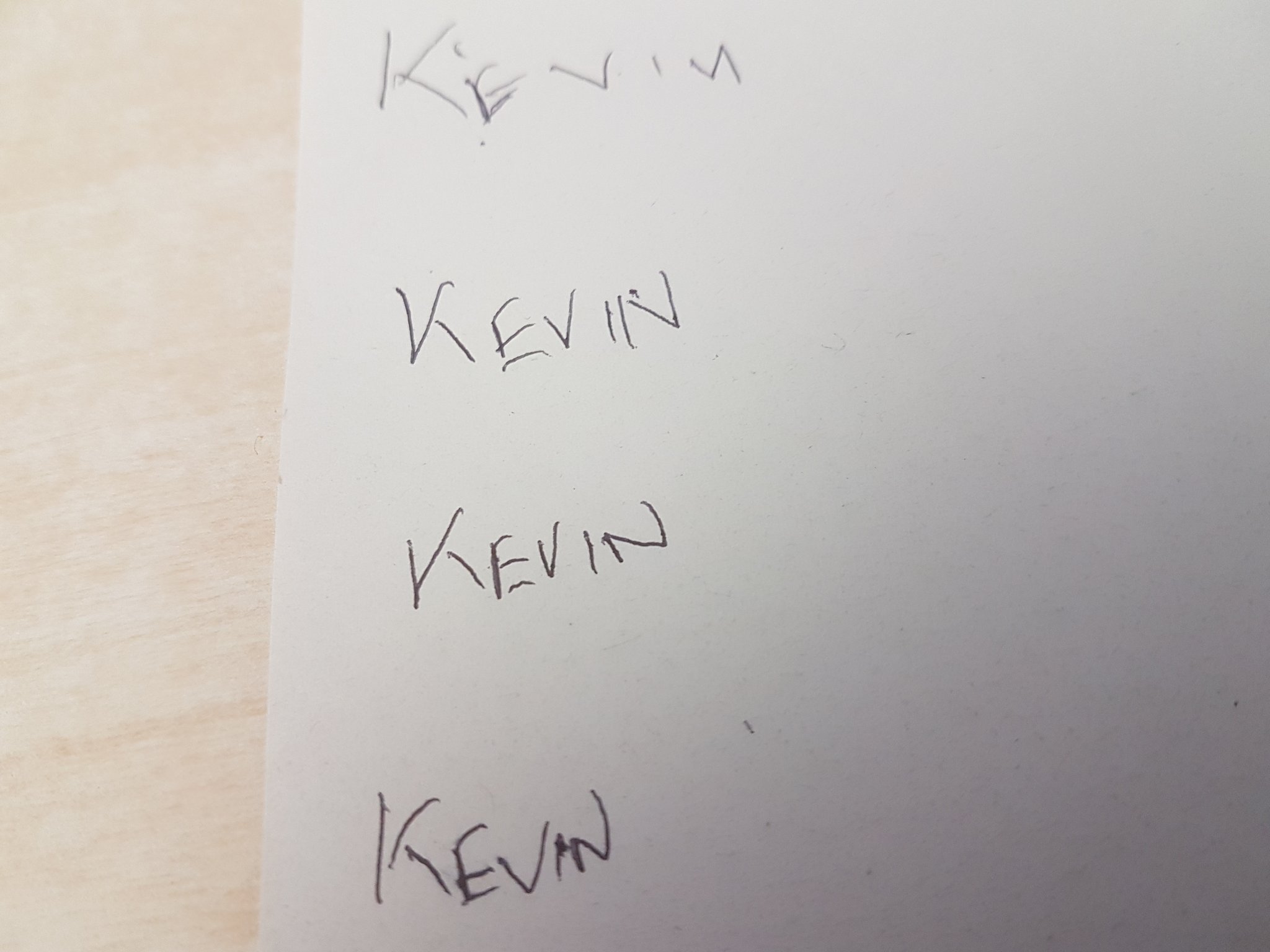 There’s no cognitive problem here, it’s purely a case of not being able to physically control my hand the way I could a week ago. It feels heavy, and I have trouble controlling the vertical axis with any degree of finesse.

I can slice bread but I can’t easily butter it. The second time I cried was on Friday when I managed to get my buttering time down to under a minute per slice. Bittersweet rather than self-pitying.

There are a few things I’d like to do with my dick that are no longer possible.

But, more pertinent to this blog, I can’t double-click a mouse and can’t tap a touchscreen. The fingers are just not fast enough to get the correct timing right now.

Typing on a keyboard is challenging, with my hands trying to cooperate across two different time zones. If you spot any typos here, they will likely be letters on the right side of the keyboard. My backspace key is getting the workout of its life.

And then there’s my speaking.

Right now, I’d say I’m comprehensible 95% of the time at peak, with my performance slipping as the conversation progresses and the fatigue kicks in.

My voice is more gravelly, sometimes a little slurry. I sometimes stammer or trip over my tongue.

People who have heard my pillow talk the morning after a boozy night out would recognize this voice. Everyone else now gets to hear it without experiencing the horrors of the night before.

But let’s look for some silver linings, shall we?

Silver lining number one: my opinions are no longer worthless on social media.

A week ago I was just a straight white able-bodied cis male, and therefore of no value whatsoever. Today, I am Disabled, and my point of view matters. I now have a card to play in the identity politics game.

Ricky Gervais better watch his fucking back, and if the next ICANN meeting is anything less than 100% accessible, I may hire a lawyer.

I know, I know, I’m not saying I’m as good as Gay or Black or Trans, but I reckon I’m at least as good as half-Jewish (on my father’s side, maybe?).

Silver lining number three: I probably qualify for a Blue Badge, which in the UK gives you priority access to convenient parking.

These things are so coveted that I’m even tempted to buy a car.

Silver lining number four: the stroke seems to have severed the part of my brain that makes me want to drink alcohol. I sincerely hope it lasts, but right now I have no desire to touch a drop of the stuff any more.

I’d go so far as to now say I think I’ve “completed” Alcohol, in much the same way as one completes a video game.

I’ve done all of the side quests, gathered all the collectibles, visited all the secret locations, done all the stranger missions, partaken of all the optional activities, maxed out all my stats, been awarded all the achievements…

I’ve partied. I’ve met interesting people in unusual places. I’ve had one-night stands with 9s and 2s. I’ve danced like nobody was looking, and sang karaoke like nobody was listening. I’ve sent all the embarrassing texts. I’ve hooked up with ambiguously gendered bar girls in Bangkok, been robbed by a hooker in Vegas, begged for coins with a homeless guy in Shoreditch. I even found the secret naked French pool party at the mansion in Vietnam.

I’m now at 99% completion, and taking on the final story mission, but the last big boss battle turns out to be a race with my five-year-old niece to see who can tie their shoelaces the fastest.

I believe there’s some DLC that extends the story, but it’s called “Cirrhosis”, and I don’t like the sound of that.

The fact that I’m now a sober man condemned to live in a body that looks and sounds perpetually drunk is a cosmic irony so on-the-nose that it would make a Greek god blush.

This must be what it’s like to be Scottish.

Silver lining number five: I’m told that, with patience and practice, this is fixable. That’s my focus right now.

I honestly don’t know how this is going to affect DI in the coming weeks.

I do know it’s currently less than seven days since a doctor first used the word “stroke” in my presence, and that almost everything I do, even the simple things like typing, is tiring. I had to take a break for a nap three times during the writing of this piece.

I intend to continue to work, just don’t expect to see many long-form analytical or editorial pieces in the near future. If a story is causing me stress, I’ll spike it sooner than risk another health crisis.

I doubt I’ll be booking any speaking engagements any time soon.

I have some other ideas too, but I’ll get to those later.