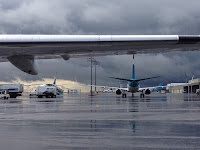 Last week the CJEU confirmed again the strict and narrow interpretation of a ‘strike’ as an extraordinary circumstance that would allow airlines not to pay out compensation for cancelled or delayed flights. In the case Eurowings (C-613/12), the passenger’s flight was cancelled due to a strike of the cabin crew of the operating air carrier. Eurowings tried to claim that they received a late notice about the strike pertaining also to their crews, as originally the notification mentioned only crews of Lufthansa as participating in that strike (Eurowings is a subsidiary of Lufthansa). Further, the strike was spontaneously extended and there was no reason for it, as Lufthansa gave in to the demands and announced pay rise on the day. Still, Eurowings showed they took mitigating measures and managed to arrange alternate flights for most of their traffic that day (para 10).

The CJEU first reminds that strike is inherent in the normal activity of air carriers, as this is an acceptable way for collective bargaining to manifest itself (para 20). It should also be expected that labour disputes could extend to different operating parts of a group of companies (para 23). The event was also not beyond the control of the operating air carrier, as the strike pertained to working conditions (which the air carrier may determine) and was announced (foreseeable event) (para 26). It should also be anticipated that employees of the subsidiary company may join such a strike in solidarity (para 27). The fact that the strike was unexpectedly extended is not decisive in considering whether it was within the air carrier’s control (para 32). It could make such a strike unlawful, but that does not change its classification to an extraordinary event, as we found out in Krüsemann (see earlier Joint cases…).

This judgment heavily repeats previous reasoning in the case Airhelp, which we already commented on (Foreseeability…).